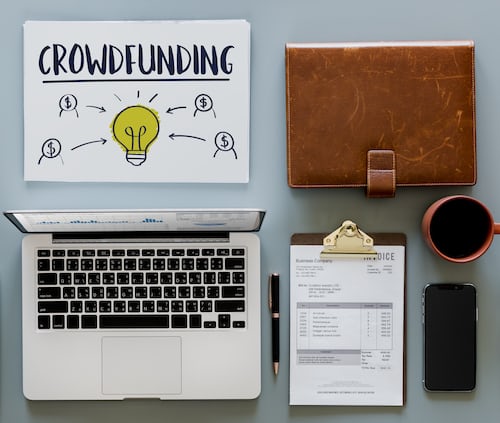 In vogue, crowdfunding can be profitable but investing in it is a risky business.

The real estate crowdfunding is expanding. This fashionable placement, regulated by the Autorité des marchés financiers (AMF) since 2014, consists of investing in real estate development through websites of crowdfunding. For the past two years, it has experienced strong growth and has even become the crowdfunding spearhead in terms of collection. In the first half of 2018, real estate accounted for 52% of the 166 million euros raised from private individuals by platforms, compared to 42% in 2017, according to statistics from the Professional Association Financement Participatif France.

The reasons for this success: in just a few clicks, you invest from 100 euros in the financing of a new real estate program. The duration of the projects is short: your money is blocked for twelve to thirty-six months. At the exit, a hope of gain up to 12 % per year. But prudence, this very attractive level of remuneration is accompanied by a not inconsiderable share of risks. Before you invest, ask yourself the right questions. Decryption in four points to understand this still recent placement.

1-What exactly are we investing in?

In concrete terms, when you invest in crowdfunding, you finance the equity of a real estate developer. To cover the cost of a building site (building apartments, houses…), the latter must apply for a bank loan. But in order to grant it, the bank asked for a capital contribution. The Promoter may, through a crowdfunding actor, solicit individuals to provide the money. In order to implement this transaction, several types of arrangements are used: formation of a holding company, of a simplified Joint Stock Company… in this framework, the individual usually takes on obligations, with guarantees more or less extensive depending on the projects (surety, mortgage, penalties for the delay…).

For greater security, the collection from investors only begins once the real estate project is well advanced. “Ideally, we intervene the day before the first stone is laid, as long as the building permit is purged of any legal remedy, the program is sold at 50% and the bank has given its agreement,” explains Quentin Romet, co-founder of the platform Homunity. In most cases, you have to wait until the sale of the property is finalized by the developer to recoup your stake, with interest.

2-What is the profitability?

The annual returns shown by the real estate crowdfunding vary, depending on the project, between 8 and 12 %, on which you will have to pay the one-off lump-sum of 30 %. This particularly attractive level is taken from the margin made available by the developer when selling the property. For the professional, the operation is costly, but remains advantageous.

“By turning to the private sector, the promoter does not open up its capital to an outside shareholder and saves time since it takes only two to three weeks to raise the funds needed for its Project,” explains Nicolas Sérès, general manager of the crowdfunding Wiseed site. The platforms charge the promoter a commission on the amounts raised, often 5%. Generally, they do not charge individuals any fees. But this is not always the case, there may be entrance fees or commissions in case of payment by credit card.

3 – Is this a risky investment?

High returns involve a significant risk of (total or partial) capital loss that you need to be aware of before you subscribe. Don’t invest more than 5% of your available savings and make sure you don’t need that money. Indeed, the real estate operation in which you put yourself may be affected by several hazards. First of all, the Promoter may encounter legal difficulties (e.g. obtaining administrative authorisations).

Then, during the construction phase, external elements of a meteorological nature (floods, storms…) or operational nature (accidents on the site, strike) can disrupt the smooth running of the works. They will have a direct impact on the respect of the deadline and the budget of the operation, and therefore on the repayment. However, under the terms of the contract negotiated with the proponent, the proponent may have to pay you penalties, in addition to your remuneration, if the project is delayed. Finally, difficulties related to the marketing of goods may arise.

But the major risk lies in the promoter’s bankruptcy. Investors can then lose their entire capital and interest, as happened with Terlat in 2017. A rare case, since 2014, the default rate is less than 1 %, according to Financement Participatif France. But this figure should be taken with caution because this type of investment is still too recent to be able to establish its solidity with enough hindsight.

4-which platform to choose?

“Your first reflex should be to make sure that the platform is registered in the official Orias registry,” says AMF investor relations director Claire Castanet. It must also have the status of participatory investment advisor (CIP) or participatory financing intermediary (IFP) “. In the world of crowdfunding, a dozen actors are in compliance with the French legislation and can claim the label ” Platform of crowdfunding regulated by the French authorities “. Among them are generalists such as Anaxago, ClubFunding and Wiseed who propose to invest in various sectors of activity including real estate. Others specialize in this area, such as Fundimmo, Homunity, Lymo and WeeXimmo.

You must then ensure that the chosen site is able to audit the developer and its parent company. But this is not an easy check. You can find out more about past transactions to find out how many and whether the first repayments were made on time. Also ask the platform if it is investing alongside you on the operations offered to individuals, a reassuring element. For each project, you also have access to a summary Regulatory Information document (DIRS), which summarises a great deal of information on the promoter, the project and the financial conditions of the operation. A must read!

Does crowdfunding always attract so many people?

In 2018, crowdfunding, a mechanism that allows companies to collect financial contributions from individuals to finance projects, raised € 402 million according to the latest barometer published by KPMG and the crowdfunding France association. Despite good results, the number of contributors falls and the balance remains mixed.

Crowdfunding experienced a hectic end of the year 2018. In October, one of the pioneers of internet-based crowdfunding, Unilend went bankrupt, before being taken over in early December by Pretup. At the beginning of the year, it is the turn of Homunity, a platform specialized in real estate, to be bought by the Credit.fr… Despite these shifts in focus, this segment continues to show solid growth. Back in figures on the main lessons of the latest barometer published by the Association Financement Participatif France (FPF) and KPMG and made based on the declarative data of 77 platforms.

Crowdfunding real estate, which consists of investing in real estate development through crowdfunding sites, recorded the largest increase (83 %). It attracted 185 million euros, compared to 101 million euros in 2017. At the level of participative finance in the broad sense, which accounts for a total of € 653 million in outstanding loans (all types of financing, including online consumer loans, online prize pools, embedded solidarity, etc.), This is the most represented Economic Sector (32 %), ahead of businesses and services (19 %) and the environment (8%).

Among the different types of investment (grant, loan, capital), the loan formula is by far the most appreciated in crowdfunding. This is the segment that has grown the most: total outstanding amounts rose by 40 % in 2018, representing € 273 million invested mostly in bonds (€202 million raised).

In contrast, capital investment fell by 19% in 2018. Knowing that it had already slowed down strongly between 2016 and 2017 (- 15 %). Some platforms believe that the abolition of the wealth tax (ISF) is partly responsible. But for Stéphanie Savel, president of the FPF association, the life cycle of investors also comes into play. “They wait for the return of their initial investments before committing themselves again,” she explains. However, the barometer points out that many of them rely on less risky investments than start-ups (SMEs, real estate projects…) and on a shorter duration (2 to 3 years in bonds for example, instead of 5 to 8 years in shares).

Smile in the mirror. Do that every morning and you'll start to see a big difference in your life.

%d bloggers like this:
We use cookies to ensure that we give you the best experience on our website. If you continue to use this site we will assume that you are happy with it.OkRead more